The weekly series features jaw-dropping science experiments and STEM challenges viewers can do at home using easy to find materials combined a touch of creativity.

“Steve Spangler has an amazing chemistry on screen as he engages viewers with the coolest hands-on science experiments and STEM experiences that are as much fun to watch as they are to do at home,” said Steve Rotfeld, SRP’s president. “Spangler is always pushing the limits like asking us to get permission to explode 20,000 ping pong balls in the atrium of the Denver Museum of Nature and Science.” 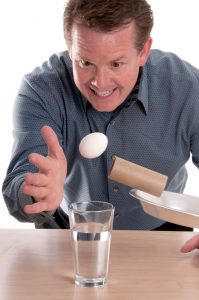 This season Spangler is joined by his long-time friend and science sidekick Bryan Higgins, who is up for any challenge regardless of the mess.

“It’s great fun to see families post photos online showing how they turned their kitchens and garages into science labs after watching the show.” said Spangler, who got his start as a science teacher in Colorado. As a strong advocate for STEM-based education, Spangler is constantly searching for the most creative ways to make science fun.

DIY Sci received two Daytime Emmy nominations for its first season. The show is part of a 3-hour E/I (Educational and Informational) syndication block called Xploration Station created by Steve Rotfeld Productions (SRP). In addition to the FOX Station Group, Xploration Station airs on Tribune’s FOX affiliates, and Sinclair’s FOX affiliates. These groups, plus others, combine to deliver Xploration Station in over 90% of the country reaching 100 million people this year. DIY Sci is also streamed on Hulu and Amazon Prime.

Spangler outgrew his traditional classroom with the advent of the internet. His YouTube channels now have over 200 million views and 1.2 million subscribers. As the founder of Steve Spangler Science, his popular line of science toys, books and hands-on kits are available in over 2,500 stores throughout the country. Spangler is also a regular guest on the Ellen Show where he never misses an opportunity to turn the simplest science experiment into a super-sized, unforgettable (and often messy) learning experience.

SRP has been producing and distributing cable and network TV shows programming for 25 years. In addition to Xploration Station, President Steve Rotfeld has produced shows including The Haney Project on Golf Channel, Wild Weddings for TLC, Wild About Animals, Awesome Adventures, The Lighter Side of Sports for ESPN, and Greatest Sports Legends for which he won an Emmy Award.